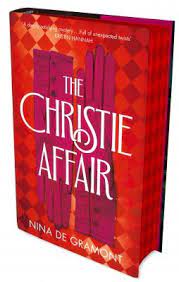 In 1926, Agatha Christie disappeared for 11 days. Only I know the truth of her disappearance.
I’m no Hercule Poirot.
I’m her husband’s mistress.

Nan O’Dea’s world is something very different. Her attempts to escape a tough London upbringing during the Great War led to a life in Ireland marred by a hidden tragedy.

After fighting her way back to England, she’s set her sights on Agatha. Because Agatha Christie has something Nan wants. And it’s not just her husband.

Despite their differences, the two women will become the most unlikely of allies. And during the mysterious eleven days that Agatha goes missing, they will unravel a dark secret that only Nan holds the key to . . .

The Christie Affair is a stunning novel which reimagines the unexplained eleven-day disappearance of Agatha Christie in 1926 that captivated the world.

I was so excited when I received a proof copy of The Christie Affair by Nina De Gramont from Mantle books, thank you so so much!

As a child growing up in Surrey, I found out that Agatha Christie had abandoned her car at Newlands Corner, which was within 10 miles of where I lived, I was obsessed with what happened to her during those missing days and it fuelled my imagination looking for clues in her books. So when I say The Christie Affair was being published I knew I had to read it.

Although it is a work of fiction by Nina de Gramont, it is exceptional! The settings are so well described and the way the plot and storylines evolve is truly immense. Not a fast read, but a slow-burning storyline involving great heartbreak, abuse, love and of course murder.

I adored the feel of the story, it takes you away to an age between the Wars, so wonderfully, the thorough research of Agatha’s disappearance is very obvious. As are the other aspects of the storyline ( I can’t say more as I really don’t want to give anything away!), the descriptive writing of the settings throughout England, are just sublime.

I have to say that I didn’t guess the storyline until very near the end, which I loved, as it makes it a real mystery and it really is a lovely tribute to Agatha Christie.

If you like books based around historical occurrences, then this is for you, its just a marvelous book.

A terrific and enthralling read and another 5 Stars read for 2021.

Nina de Gramont (also known as Marina Gessner) lives in coastal North Carolina with her husband, the writer David Gessner. She teaches at the University of North Carolina Wilmington and is almost always in the company of her two dogs, Missy and Isabelle. She’s the author of the acclaimed Meet Me at the River, Every Little Thing in the World, Gossip of the Starlings, The Last September, as well as The Distance from Me to You, which has recently been optioned for a movie.