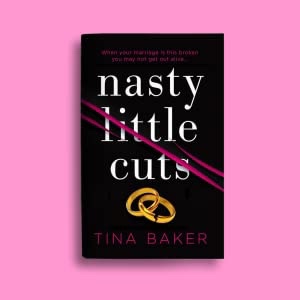 J; Thank you so much Tina for being a guest on my blog, I’m so honoured.

J: I’d like to start by asking, have you always wanted to be a writer? And where did the idea of Nasty Little Cuts come from?

TB: ALWAYS! From the time I first started to scribble, before school. I was THRILLED being able to write, although spelling, not so much. I wrote poems and stories as a child.

Nasty Little Cuts was originally called Serrations. The idea was to write about all those irritating little things that build in a relationship until they can cause huge damage, coupled with two very flawed people at a tense time in their lives – Christmas, money worries, menopause, bereavement – catalysing the final explosion.

J; The writing of Deb and Marc’s relationship in Nasty Little Cuts is extremely realistic, what research did you do in writing the book?

TB: I’ve been in several toxic relationships. But not like this. It’s fictionalised. The book is an amalgamation of all the (many) bad things that have happened to me.

I’ve also interviewed both women and men who’ve been in abusive relationships in my work as a journalist.

J; Who would you like to see playing the parts of Deb & Marc if (and when!) Nasty Little Cuts is turned into a TV series/Movie?

TB: WHEN! Please, God! I’d love Jamie Dornan as Marc. Not just for his looks, but because he can play wounded as well as brooding.

Debs, I’d love to be played by a working-class actress. I adored Sophie Willan in the award-winning comedy, Alma’s Not Normal. She’d be great.

J; As a child growing up, were you an avid reader or was television your thing? Do you have a favourite childhood book or television programme?

TB; We didn’t have a TV for years. Radio was my first love.

I loved reading and read everything, including my dad’s, very age-inappropriate books and as many adult books in the library as I could when no one was watching.

Early TV I loved The Magic Roundabout and Stingray and Thunderbirds. My first crush was on a puppet! Captain Troy Tempest!

Fave children’s books, Wind in the Willows, The Wombles, Paddington, A Wrinkle in Time.

TB; They are all my favourite children. You can’t make me choose!

I loved The Last House on Needless Street, Girl A, The Stranding, The End of Men.

I read a lot of crime last year because I hadn’t read a lot before. And so much pre-pandemic horror! Even The Last One At The Party was about a bloody pandemic. I had no idea because I bought a load of debuts just because and I sometimes like to read without the synopsis

TB; Again, its TOO HARD to choose!!

I’ve re-read a lot of DH Lawrence, Dickens, Thomas Hardy and the poetry of Sylvia Plath, Vasko Popa and Ted Hughes. I love Joyce Carol Oates, Ann Tyler and ALL the Viper authors.

J; If you could go back in time, to one historical event, to witness it, what would it be and why?

TB; Either a party at Studio 54 in the OTT heyday or being on the moon at the moon landing.

J; What’s the most ridiculous thing you have bought?

J; If you could invite four people to dinner, living or dead, who would you invite and why?

Billy Connolly. The best storyteller in the business.

J; Was there ever something that you thought was possible after watching some movie as a kid, that is now absolutely ridiculous to think of in retrospect?

TB; There was a children’s cartoon where a little girl wished her hair to keep growing. And I watched so many films about miracles, I prayed for my teddy to become real.

J; If you could visit anywhere in the world, where would you go?

TB; Right now ANYWHERE!!! I’ve not been abroad for 4 years. I’ve only had 1 week off since the pandemic kicked off. So, either a week or two in the Caribbean or Cornwall (my husband’s from there) when it’s warmer!

J; What’s the best piece of advice you’ve ever been given?

TB; Don’t let the bastards grind you down. One of my Dad’s.

J; What is your routine for an average weekday?

TB: There isn’t an exact routine as some of the personal training sessions revolve around other people. Ditto press surrounding the publication of a new book.

Writing is a bit haphazard at the moment too. My brain doesn’t work the same thanks to long term anxiety. In an ideal week I’d write a little every day, some days longer, teach a fitness class or 2, and post silly things on social media.

J; Are you currently writing another book?

TB; I’ve just finished another thriller for Viper which has yet to be edited. The story of a domestic cleaner who turns to crime. And I’m kicking around ideas for book 4 for Viper.