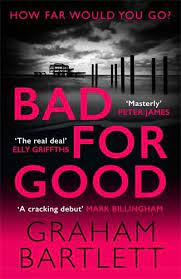 JW: Thank you so much Graham for being a guest on my blog, it is a huge honour!

JW: I’d like to start by asking, have you always wanted to be a writer? In those days of fighting crime, did you think about writing a fiction novel then?

GB: I’m so unlike many authors in that I had no thoughts of being a writer until I was in my later 40s. As with most things in my life, it all happened by accident. Peter James had been a friend for a few years and saw a blog I wrote. He called me up and said he liked my writing style, describing it as ‘not quite of a commercial standard but workable.’ He followed that up with a suggestion that we write a non-fiction of the stories that inspired the Roy Grace novels. So, the Best Seller, Death Comes Knocking was born. I did most of the writing and he tidied it up, but I got the bug and am now so proud I’m going to be a solo published author.

JW: Where did the inspiration for Bad For Good come from, it is a quite unique and realistic plot!

GB: It all started with me getting angry with the swinging cuts the police were suffering. I imagined what would happen if it got much worse. Would vigilantism take over as the crime control method of choice? And what if that was sponsored by corrupt officials? That was the birth of Bad of Good and I weaved it into a world I was very familiar with so, hopefully, that’s where the terrifying authenticity comes from.

JW: Who would you like to see playing the part of DS Jo Howe, if /when Bad For Good is made into a TV series?

GB; Keeley Hawes! She wasn’t in mind when I wrote Jo but I know she’d play such a complex, driven yet vulnerable character perfectly.

JW: As a child growing up, were you an avid reader or was television your thing? Do you have a favourite childhood book or television programme?

GB: When I was very young, I loved the Narnia stories as the worlds and adventures they took me on were spellbinding. I remember then picking up When the Lion Feeds, by Wilbur Smith and similarly lost myself in this time a real, yet far away, world. His storytelling just drew me in and that started my love of books. In terms of the TV, it has to be The Professionals. I loved it so much that I remember my police -officer uncle, no doubt prompted by my dad, sitting me down to check that I knew the force I’d set my sights on joining wasn’t actually like that!

JW: As we’re now in May, which book that you’ve read this year has been your favourite? OR which are you most looking forward to?

GB: Wow, there are so so many! I think I’ll plump for Truth be Told by Kia Abdullah. The themes she fearlessly explores around class, privilege, race and religion are so powerfully woven into a gripping race to the truth, it left me quite breathless.

I can’t wait for The Murder Book by Mark Billingham. His Thorne stories, and the standalone, are utterly addictive and so brilliantly written it makes me sick! He’s a friend so I can say that!

JW: Have you ever been starstruck by meeting one of your heroes in real life?

GB: I love Gregg Hurwitz’s Orphan X books. The whole concept of an orphan who escapes a black ops programme to go around helping desperate people, in the most violent ways you could imagine, is stunning. But it’s his writing which really brings it alive. There is not a wasted syllable, and his descriptive powers and similes are inspired. In 2018, I’d had a few beers at Harrogate Crime Festival when someone, out of the blue, introduced him to me. Well, I fawned over him, quoting brilliant lines I remembered. I could tell he was bored, despite smiling nicely. Thankfully someone ushered me away before I made a complete fool of myself!

JW: What do you consider your greatest achievement?

GB: No hesitation – bringing up triplets to become the wonderful young adults they are now. My wife, Julie, and I always put them first. She gave up her job and I did what I could not to get unnecessarily sucked into work so we could be there for them. Now we have a police officer (who’s also a high-level football referee), a nurse and an astrophysics PhD (don’t ask!) We couldn’t be more proud of Conall, Niamh and Deaglan.

JW: If you could go back in time, to one historical event, to witness it, what would it be and why?

GB: The 1966 World Cup final. I love football and it would have been great to see what would become a once in a lifetime victory for England. The young, poorly paid, un-pampered men who brought the country the pride we so needed, probably wasn’t as appreciated as it would have been if they’d known what footballing failures we’d become and how mollycoddled today’s players are.

JW: What is something you are passionate about aside from writing?

GB: It might sound corny, but my family. I still adore spending time with the ‘kids’ (I watch Conall being abused by players and crowds alike most Saturdays at Football) and just enjoying their company as funny, intelligent grown-ups. I love it that two still live at home, and they’re 25 in July!

JW: Can you share a shelfie with us? (A photo of your bookshelf)

GB: One of many bookshelves in my home.

JW: If you could invite four people to dinner, living or dead, who would you invite and why?

GB: Wilbur Smith – to suck up every ounce of his advice and hopefully learn that he suffered from imposter syndrome too.

Alexander Hamilton – I’m fascinated with his story (borne from the musical, I’ll admit) but would love to know how it felt to build a nation amongst such hostility.

Doreen Lawrence – To say sorry on behalf of the police service (although I had nothing to do with the Metropolitan Police then or now) and to hear how a mother could show such dignity in the wake of such tragedy and injustice.

Oscar Wilde – He’d just be fascinating, but I’d love to hear how it was to suffer the horrors of being punished just for being who you were.

JW: What’s the best piece of advice you’ve ever been given?

GB: Be kind and if you can’t be kind, be quiet.

JW: What’s next? What are you currently working on??

GB: As well as advising dozens of authors and TV writers, I’m editing the second in the Jo Howe series and writing Book 3. I’m really putting her through it by the way!

You can BUY Bad For Good HERE